A Darker Shade of Magic

A Conjuring of Light 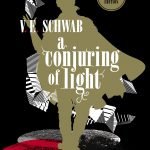 A Gathering of Shadows

Kell is plagued by his guilt. Restless, and having given up smuggling, he is visited by dreams of ominous magical events, waking only to think of Lila. As red London prepares for the element games – An extravagant international competition of magic – a certain pirate ship draws closer. But another London is coming back to life, a shadow that was gone in the night reappears in the morning. Black London has risen again – and so to keep magic’s balance, another London must fall.

A Gathering of Shadows:

Schwab’s fantastic follow-up to 2015 s A Darker Shade of Magic returns to the linked alternate realities of London: Grey London, our own familiar magic-free city in its Regency era; Red London, where people and magic work in concert; White London, where people struggle for control of magic; and the memory of Black London, destroyed by terrible spells. Lila Bard, a cutpurse from Grey London, has found freedom on the high seas with a privateer who’s more than he seems. Kell, a powerful magician with more than a little wanderlust, has given up smuggling between the Londons now that he’s magically bound to his brother, the Red prince Rhy. Red London is about to host the Essen Tasch, or Element Games, pitting the most talented magicians against one another; this would be the perfect place for Lila to show off her burgeoning powers, if she can get in and she’s eager to see Kell again, in spite of herself. Meanwhile, in White London, a new king rises, and he will do anything, and sacrifice anyone, to make his London great again. Lila, Kell, and Rhy are complex, fully realized creations who challenge conventional ideas of what a hero should be made of, and the supporting characters feel just as real. New touches such as a bustling magical market enliven already-rich world-building. Tensions rise steadily, culminating with the exciting Element Games, and the finale will leave readers breathless. This is how fantasy should be done. –Publisher’s Weekly (starred review)

An absorbing fantasy adventure set in a world where magic can be a gift or a weapon. It’s been four months since Lila Bard, thief from another world, talked her way onto a ship called the Night Spire and sailed away from Red London with an enigmatic captain named Alucard Emery, in search of adventure. She’s been absorbed in learning as much as she can about the magic that s everywhere in this new world. Meanwhile, Kell is struggling to deal with the aftermath of the battle in which he and Lila saved the world, in particular, the magical bargain he made to save his adoptive brother Rhy s life, the bargain that links their lives and means they share each other’s pain literally. Along with the rest of Red London, Rhy and Kell are getting ready for the upcoming magical tournament called the Essen Tasch. But there are deceptions lurking beneath the glittering surface of this festive event, and there are old enemies waiting for their chance to strike. This sequel to Schwab’s A Darker Shade of Magic (2015) expands the world beyond Red London and deepens the appealingly unconventional people that populate it. These rich, lifelike characters draw the reader in and make this well-realized fantasy impossible to put down. Fans of A Darker Shade of Magic will love its sequel, and fantasy fans who haven’t yet read the first book in this series should hurry to catch up. –Kirkus

V.E. Schwab is the bestselling author of Vicious, which was a Publishers Weekly Best Book of 2013, an Amazon Best Book of the Year (as well as Best Book of the month), a semi-finalist in the Goodreads Choice 2013 Book Awards, and the ALA top pick for Fantasy for their 2014 reading list. It was also noted in various author best-of lists, from Laini Taylor to Chuck Wendig. She is also the author of The Near Witch, The Archived, and The Unbound.
Author can be found online a https://www.veschwab.com/
Have a look at our collection : Click Here

Be the first to review “A Gathering of Shadows” Cancel reply