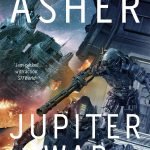 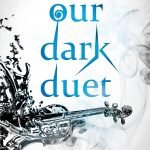 In a world devoid of hope, is revenge the only way out?
The Argus Space Station looks down on a nightmarish Earth. And from here, the Committee enforces its despotic rule. It governs a
corrupt world, where the poor are starving – and are policed by mechanized overseers wielding identity-reader guns. There are also
too many people and too few resources, so the Committee has decided twelve billion people must die. So they prepare to unleash
the full power of their Station’s weaponry to make this happen.

Alan Saul wakes to this world, confined in a crate bound for a Calais incinerator. He doesn’t know why he’s there; he only
remembers pain and his tormentor’s face. And he has company: Janus, a rogue intelligence, who is inhabiting forbidden hardware
in his skull. As Janus shows his host a damaged Earth, Saul resolves to discover who he was – and kill his interrogator. Next he will
take on the Committee and topple their debased regime.

Fast, furious, violent, slightly tongue-in-cheek (I think), and a whole lot of fun that makes 1984 seem like a children’s tea party . . . the start of another promising series from Asher. Go on, dive in, you won’t be disappointed — British Fantasy Society

Delivers plenty of thrills, and the climax also sets up a very intriguing status quo for the second volume — SFX

I had an absolute blast with this book . . . his work really does get better and better — Falcata Times

The Orwellian intro had me utterly hooked right from the start. I simply couldn’t stop reading until I reached the end — WorldsInInk

Action packed and thrilling, The Departure is a must for all fans of contemporary science fiction who haven’t experienced Asher’s visceral novels before — We Love This Book

A man with no memories
Wakes to a world without justice

The Argus Space Station looks down on a nightmarish Earth. And from here, the Committee enforces its despotic rule. Corruption is rife, people starve and the poor are policed by mechanized overseers. But worse is yet to come. Earth is desperately over-populated and under-resourced, so the Committee has decided to do the unthinkable – to kill twelve billion people.

Alan Saul wakes inside a sealed crate, bound for an incinerator. All he recalls is pain and his tormentor’s face. And he has company: Janus, a rogue intelligence, inhabiting forbidden hardware within his skull. As Janus shows his host a damaged Earth, Saul resolves to annihilate the Committee. But first, he resolves to reclaim his memories and hunt down his interrogator.

‘I had an absolute blast with this book’
Falcata Times

Neal Asher was born in Billericay, Essex, and divides his time between the UK and Crete. The majority of his novels are set within one future history, known as the Polity universe which encompasses many classic science fiction tropes including world-ruling artificial intelligences, androids, hive minds and aliens. His full-length novels include Gridlinked, The Skinner, The Line of Polity, Cowl, Brass Man, The Voyage of the Sable Keech, Hilldiggers, Prador Moon, Line War, Shadow of the Scorpion, Orbus and The Technician. His Owner series novels include The Departure, Zero Point and Jupiter War.
Author can be found online at https://www.nealasher.co.uk/
Have a look at our collection : Click Here

Be the first to review “The Departure” Cancel reply