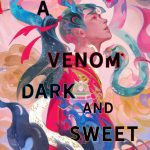 A Venom Dark and Sweet

Empire of the Vampire – New Cover 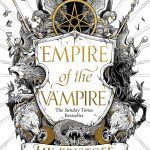 Full of explosive magic, searing romance, and heartbreaking betrayal, These Infinite Threads is the breathtaking sequel to the instant New York Times and Sunday Times bestseller This Woven Kingdom

With the heat of a kiss, the walls between Alizeh, the long-lost heir to an ancient Jinn kingdom, and Kamran, the crown prince of the Ardunian empire, have crumbled. And so have both of their lives.

Kamran’s grandfather, the king of Ardunia, lays dead, the terrible secret of his deal with the devil exposed to the world. Cyrus, the mysterious copper-haired royal, has stolen Alizeh away to Tulan, the neighboring kingdom where he rules. Cyrus has made his own deal with the devil―one that would require Alizeh to betray her feelings for Kamran if she’s to reclaim the Jinn throne.

Alizeh wants nothing to do with Cyrus, or his deal with Iblees. But with no means of escaping Tulan, and with the tantalizing promise of fulfilling her destiny as the heir to the Jinn, she’s forced to wonder whether she can set aside her emotions―and finally become the queen her people need.

Kamran, meanwhile, is picking up the pieces of his broken kingdom. Facing betrayal at every turn, all he knows for certain is that he must go to Tulan to avenge his grandfather. He can only hope that Alizeh will be waiting for him there―and that she’s not yet become queen of Tulan.

“In a tale as exquisitely crafted as one of Alizeh’s own garments, Mafi weaves a spell of destiny and danger, forbidden love and courtly intrigue, magic and revolution.”―Cassandra Clare, #1 NYT bestselling author of The Last Hours

“This story is so magical and transportive that I fully expected the book would know the moment I’d finished ― within hours, no less ― and promptly unravel into a pile of jewels and silks in my hands. Mafi’s diamond-bright lyrical voice weaves a tale that is gilded in magic, laced with subterfuge, adorned with the brocade of a tortuous romance, and richly embroidered with Persian mythology. I cannot wait for more.”―Roshani Chokshi, NYT bestselling author of The Gilded Wolves

“This Woven Kingdom is an exquisite fantasy. Rich with clever prose, delicious twists, and breathtaking world building. Prepare to be destroyed―this one will wrench at your heart and make it pound, and in the end it will leave you entirely speechless.”―Stephanie Garber, #1 NYT bestselling author of the Caraval series

“I’ve been longing to read a story inspired by The Shahnameh, and This Woven Kingdom captivated me with its deft worldbuilding and searing romance. Alizeh’s quiet strength unfurls against a darkly magical backdrop. This book is a glittering jewel, complete with razor-sharp edges.’ –Renée Ahdieh, NYT bestselling author of Wrath & the Dawn

“In a heart-wrenching novel, Mafi complements rich worldbuilding with lushly descriptive, sensorial prose that inspires the novel’s mythological backdrop, against which plays out an emotional plot, and a tortured romance, layered with court intrigue.” – Publishers Weekly

Be the first to review “These Infinite Threads” Cancel reply