The Storied Life of A.J. Fikry 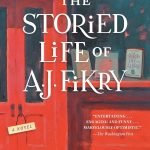 A lush tapestry of magic, romance, and revolution, drawing inspiration from bolivian politics and history. Ximena is the decoy condesa, a stand-in for the last remaining illustrian royal. Her people lost everything when the usurper, atoc, used an ancient relic to summon ghosts and drive the illustrious from LA ciudad. Now ximena’s motivated by her insatiable thirst for revenge, and her rare ability to spin thread from Moonlight. When atoc demands the real condesa’s hand in marriage, it’s ximena’s duty to go in her stead. Using the opportunity to get close to atoc, she can steal his relic and return the true aristócrata to their rightful place. But a masked vigilante, a warm-hearted princess, and a thoughtful healer challenge ximena, and her mission becomes more complicated. There could be a way to overthrow the usurper without starting another war, but only if ximena turns her back on revenge—and her condesa.

“In Ibañez’s debut novel, every detail is rich with meaning and nuance. [Woven in Moonlight] showcases a fantasy world that transcends traditional Western tropes and underscores the value of complex female characters.” ― TIME, “The 100 Best Fantasy Books of All Time”

“Woven in Moonlight ― appropriately ― weaves a beautiful spell that takes culturally specific details and spins them into an engaging fantasy world.” – NPR

* “Woven in Moonlight is a nuanced and empathetic fantasy… Touching on ideas of restorative justice in a unique and vivid setting, Isabel Ibañez delivers a confident, subtle and inspiring debut about what it takes to move a divided society forward.” – BookPage, starred review

* “Isabel Ibañez’s gorgeously written YA debut builds a world that feels true to life with a distinctive magic system at its core. The revolt and the politics between the Illustrians and Llacsans are nuanced and the characters from both groups are fully fleshed individuals with their own motives… Woven in Moonight spins a satisfying tale of adventure, romance and magic.” – Shelf Awareness, starred review

“With sword fights, damsels, vigilantes, magic, and betrayal, this thoughtful novel should have broad appeal.” – Booklist

“[Woven in Moonlight] brings much to the table, from mouth-watering depictions of food to juicy politics to an intricate magic system involving weaving moonlight into tapestries, but where it really shines is in its insistence that people should question their inherent beliefs.” – BCCB


“A lush, vibrant feast of a book, set in a world as colorful and inventive as the fierce heroine’s magical tapestries. I could have remained lost in its pages forever.” – Margaret Rogerson, New York Times bestselling author of An Enchantment of Ravens

“Isabel Ibañez brings a modern story to an ancient world―with immersive prose, original magic, and characters as rich as the Bolivian culture that constructs the story. A wholly unique book for the YA shelf.” – Adrienne Young, New York Times bestselling author of Sky in the Deep

“A spellbinding, vivid debut. Plot twists abound, the magic is uniquely drawn, and intrigue illuminates the pages. The world of Inkasisa is so beautifully rendered I never wanted to leave it.” – Rebecca Ross, author of Queen’s Rising

Isabel Ibañez was born in Boca Raton, Florida and is the proud daughter of two Bolivian immigrants. A true word nerd, she received her degree in creative writing and has been a Pitch Wars mentor for three years. Isabel is an avid movie goer and loves hosting family and friends around the dinner table. She currently lives in Winter Park, Florida with her husband, their adorable dog, and a serious collection of books.
Author can be found online at https://www.isabelibanez.com/
Have a look at our collection : Click Here

Be the first to review “Woven in Moonlight” Cancel reply